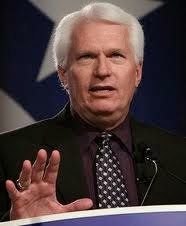 American Family Association: The United States Should Be 100% White Protestant

“Diversity, as the first syllable in the word implies, divides. It does not unify. It fractures, debilitates, and diffuses. Energy that could be harnessed through unity of purpose and values is frittered away. America became the greatest nation the world has ever known – freer, stronger, more prosperous, more stable – for one reason: an unshakable commitment to common core values and standards. That’s not diversity, that’s unity. At the time of the founding, 99.8% of the population of our fledgling nation was Christian. And 98.4% of the population was Protestant. It is no exaggeration to say that the Protestant faith, particularly its moral values and its work ethic, made America what it became. It was this common faith in Christianity and its Savior and our common adherence to a transcendent moral code that made America what it became. Our strength was not found in our diversity but in our unity.” – Bryan Fischer, writing for the American Family Association, which uses Disqus.

Previous Dot-HIV Internet Domain Launches
Next Editorial Of The Day