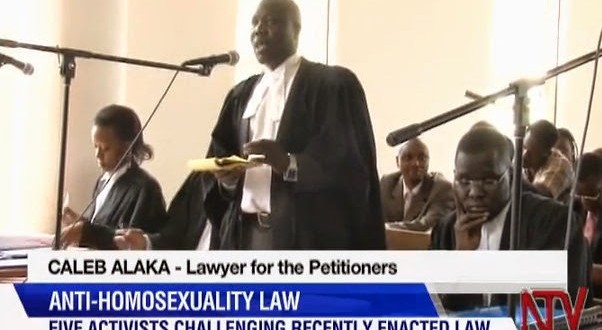 Uganda’s Constitutional Court is hearing a challenge to the Anti-Homosexuality Act, which calls for punishments up to life in prison for “crimes” such as “repeated homosexual acts.”

The activists argue that the law was passed in parliament without the necessary quorum of lawmakers. The 10 petitioners – including two Ugandan rights organisations – also claim that the law violates the constitutional right to privacy and dignity, as well as the right to be free from discrimination and cruel, inhuman and degrading treatment. Judges have adjourned the hearings until Friday, when they are expected to rule on the quorum issue. Ugandan state lawyers defended the law on Thursday, the second day of the hearings, asking judges to dismiss the petition. “There is no evidence about the quorum,” state attorney Patricia Mutesa told the court in the capital, Kampala. But prominent gay-rights activist Frank Mugisha, one of the petitioners, said he was optimistic that judges would rule in favour of scrapping the law. “I think that we could have a very good judgment tomorrow, and if we get that judgment then it’s over – and we just have to celebrate,” said Mugisha, who heads the Sexual Minorities Uganda group.

Sexual Minorities Uganda is the group suing Scott Lively for crimes against humanity. Lively is widely considered to have sparked the movement for the passage of the bill. Several nations including the United States have curtailed aid to Uganda is the wake of the bill’s enactment. Ugandan Pastor Martin “Eat Da Poo Poo” Ssempa is losing his shit (see what I did there?) on Twitter over the prospect of the bill being overturned. Even if the bill is struck down on parliamentary technicalities, we can expect an attempt to have it re-approved.