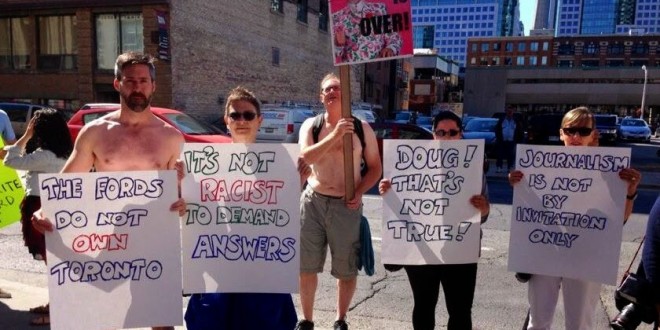 Toronto Mayor Rob Ford was greeted by about a dozen shirtless protesters as he entered a Toronto radio station for an interview Friday morning. The protest was an act of defiance inspired by a Toronto teacher’s anti-Ford rant after encountering the mayor at a parade while the teacher was out for a shirtless jog. The protestors, holding up signs with slogans such as “Clown time is over” and “It’s not racist to demand answers” began gathering at about 9 a.m. on Richmond Street to meet the mayor as he arrived at Newstalk 1010. “The people have had enough,” said one of the protestors. “Answer the questions, Robby.” The #shirtlesshorde, as the group is known, is emulating Joe Killoran, the jogger who ran up to Mayor Ford during an East York parade on Canada Day, yelling questions at the mayor as he tried to move through a crowd.