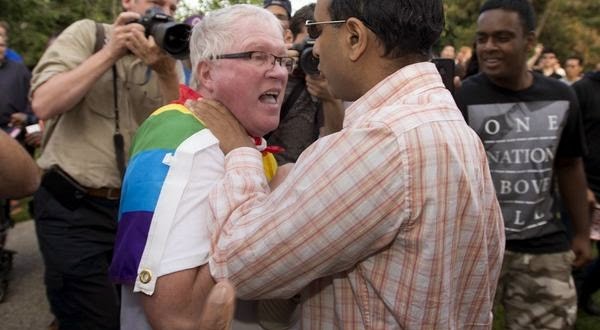 Toronto Mayor Rob Ford’s annual Ford Fest drew more than a thousand supporters to a park in the city’s east end, but the event was marred by some tense moments as LGBT activists were jeered at and told to go home by some supporters. Ford drew heat from the LGBT community again recently after he remained seated while city council gave a standing ovation to organizers of Toronto’s World Pride festival. He did not answer questions from reporters about why he didn’t stand along with fellow councillors, but said he’s not homophobic. “He’s a disgrace,” said protester Kevin Speight. “He’s embarrassing our city.” The mayor’s supporters, however, weren’t pleased with the anti-Ford sentiment, with a number of individuals getting into verbal confrontations with the protesters. At one point, a few Ford fans grabbed the signs being held by the protesters, tore them up, and threw them on the ground, stamping on them in the process. “Go home,” they yelled. “This is Ford Nation!”

No arrests were made but police are investigating. Watch below as Ford supporters tear up the signs of the LGBT activists.