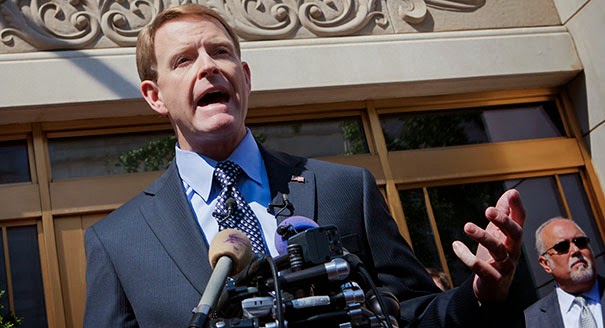 Tony Perkins Has The Virginia Sadz

“The U.S. Court of Appeals for the Fourth Circuit yesterday became the second federal appeals court to declare that a state (in this case, Virginia) defining marriage as the union of one man and one woman violates the U.S. Constitution. The three-judge panel divided 2-1, with the majority declaring that ‘the fundamental right to marry encompasses the right to same-sex marriage.’

“Unfortunately, the majority is clearly and obviously wrong on this point, which dissenting Judge Paul V. Niemeyer described as mere ‘linguistic manipulation.’ As Niemeyer pointed out, the Supreme Court precedent of Washington v. Glucksberg (a 1997 case in which the Court rejected a ‘right’ to assisted suicide) lays out a specific analysis which must be undertaken before a new ‘fundamental right’ can be declared. It requires a careful description of the asserted right — which in this case is clearly the right to marry a person of the same sex. It then requires a demonstration that this specific ‘right’ is ‘deeply rooted in this Nation’s history and tradition.’ Since ‘same-sex marriage’ has only existed in the U.S. for ten years (and in more than one state for only six), it does not even come close to meeting that standard.

“Judge Niemeyer also faults the majority for ‘failing to explain, for example, why this broad right to marry, as the majority defines it, does not also encompass the ‘right’ of a father to marry his daughter or the ‘right’ of any person to marry multiple partners.’ We must hope that the Supreme Court has more logic — and respect for its own precedents — when this or a similar case reaches them.” – Hate group leader Tony Perkins, via press release.