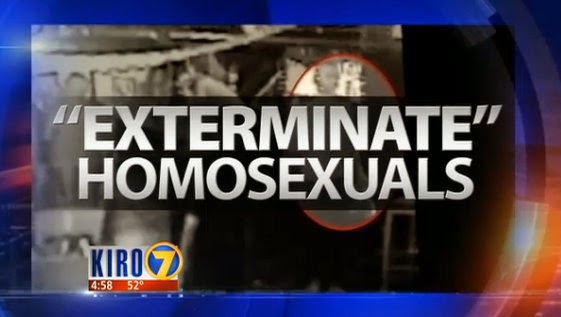 From the Seattle Post-Intelligencer:

The Seattle man who set fire to a popular Capitol Hill club during a New Year’s celebration was sentenced Thursday to 10 years in prison – twice as long as the term requested by prosecutors. Facing federal charges in the dangerous but non-injurious blaze, Musab Masmari admitted to starting a fire inside Neighbours Nightclub during the first minutes of 2014. Masmari was caught on camera setting fire to a rear stairwell at Neighbours, a large, decades-old gay nightclub. About 15 minutes after midnight, Masmari poured gasoline in a stairway to Neighbours’ balcony and lit the pool of fuel. The fire was quickly doused with a fire extinguisher; there were about 750 people in the club at the time.

Masmari, a California native also known as Musab Musmari, was arrested days later on his way to Sea-Tac Airport after buying a one-way ticket to Turkey. Writing the court, Assistant U.S. Attorney Todd Greenberg said evidence suggests Masmari was motivated by an “intolerable hate.” “One of Masmari’s close associates was interviewed by investigators and reported that Masmari confided in him that he ‘burned a gay club’ and that he did it because ‘what these people are doing is wrong,’” Greenberg said in court papers. Greenberg said another person close to Masmari said he had a “general hostility towards homosexuality.” Attorneys for Masmari Charles Swift and Jeffrey Cohen noted that prosecutors were unwilling to try to prove that hate motivated the arson.

Ten years still feels like a light sentence for the attempted murder of hundreds of people. But good for the judge.