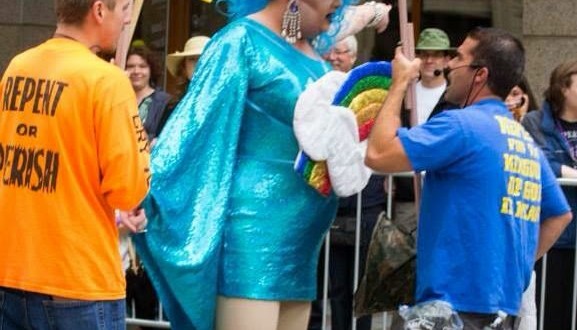 On Sunday a group of Christian protesters disrupted the start of Seattle’s gay pride parade and got in the face of local drag star Mama Tits, who was not having it. Afterwards, she spoke to Seattle Gay Scene:

“I saw them coming up the road pre-Parade and looked at Sylvia and DonnaTella and said, ‘Ladies, let’s make a wall!’ Before I knew it, I was standing tits to nose with the leader guy on the megaphone. It felt like I had the strength of all the people who had ever been hurt by these people standing right behind be me giving me power! I was almost in auto-pilot mode from my days as a Sister of Perpetual Indulgence. I planted myself in his path and wouldn’t move. When he walked around me, I got back in front of him again and again.I stared him in the eyes and could see the pain in his eyes, I could see he was scared and he should have been. He tried to hit me with his sign, but like Bianca Del Rio says ‘Not Today, Satan!’ pushed his sign away from my face and hair, because you DO NOT TOUCH my hair. And, it was all I could do to NOT get violent, but I didn’t because once that happens, we all lose.