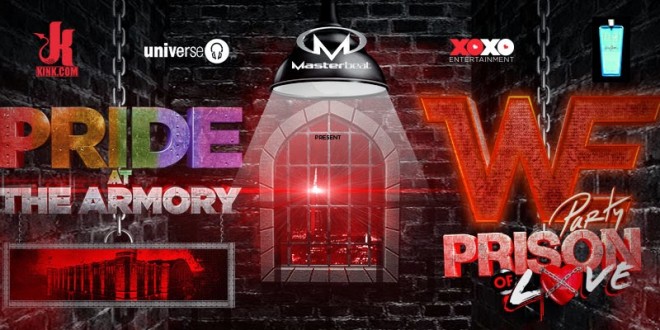 About 150 members of the activist group Gay Shame protested outside of the Prison Of Love circuit party in San Francisco on Saturday night, where some partygoers were reportedly pelted with fruits and vegetables. According to Gay Shame, a prison-themed party eroticizes the issue of prison rape and trivializes the treatment of transwomen in male prisons. The protest briefly closed down the entrance of the event and several protesters were arrested when the tense situation turned violent. Via SF Weekly:

In a press release, Gay Shame says three protesters, Rebecca Ruiz-Lichter, Prisca Carpenter, and Sarai Robles-Mendez, remain in custody “on trumped up charges.” According to Gay Shame, the arrests occurred after the protest had dispersed, when a security guard from Shaw Security Management, Kink’s security contractor, followed several protesters to the 16th Street Mission BART station and confronted them. The organization also alleges that protesters were clubbed, tackled, bloodied, and beaten during the protest. John Viola, a legal observer for the National Lawyers Guild, was among those arrested. The National Lawyers Guild says Ruiz-Lichter, Carpenter, and Robles-Mendez are being held on felony lynching charges. (Under California law, “lynching” refers to protesters or rioters who attempt to remove an individual from police custody.) Ruiz-Lichter and Robles-Mendez’s bail is set at $50,000 each; Carpenter’s bail is $78,000. Rachel Lederman, an attorney with the National Lawyers Guild, says “We are concerned that Viola was arrested to intimidate us against monitoring the police and giving out legal information,” Lederman said.

According to a spokesman for Kink.com, the host and a co-sponsor of the event, their security guards “did not retaliate in any way.” More from the Bay Guardian:

Though a statement from Gay Shame said the protesters were arrested “without provocation,” [SFPD spokesman Albie] Esparza told us they stemmed from alleged assaults on the security guards at the party by protesters. According to an account of the protest compiled by Armory facilities manager Andrew Harvill and provided by Kink.com CEO and Armory owner Peter Acworth, “protesters were largely peaceful, though unruly. Having said that, at least a dozen were highly militant.” Witnesses recalled seeing a Kink.com security guard follow protesters to 16th Street roughly 30 minutes after the protest ended and begin “targeting people who were casually standing on the sidewalk getting ready to go home.” According to the witnesses, “the arrests and police violence were reportedly in retaliation for the night’s protest.” Esparza confirmed that a security guard followed the protesters down to the plaza, though for the purpose of identifying the offenders when the police arrived. One protester reportedly threw a metal object and made threats toward a security guard during the protest, both of which are being charged as felonies, while another allegedly threw an egg and spit on a security guard.

The party had an estimated 3000 attendees.

Previous Slate: Create Your Own Marriage Ruling
Next One Million Moms Vs Mystery Girls