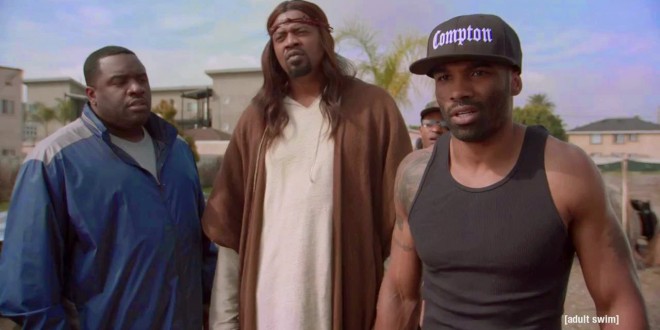 One Million Moms Vs Black Jesus

The late night programming on the Cartoon Network, known as Adult Swim, plans to air the non-animated show “Black Jesus” portraying Jesus as a “black guy living in the hood.” The show depicts him living in Compton Gardens and makes a mockery of our Lord. The foul language used in the trailer, including using the Lord’s name in vain, is disgusting. In addition, there is violence, gunfire and other inappropriate gestures which completely misrepresent Jesus. This is blasphemy! “Black Jesus” is set to premiere on August 7 at 11:00 pm ET/ 10:00 pm CT, unless we intervene. Adult Swim plans to blaspheme Jesus on a weekly basis. This mockery will be similar to “South Park” and “Family Guy,” but much worse since the entire program will be based on lies about Christianity.

1MM will defend our Savior because He is Holy! Adult Swim is obviously not a family network, and this program is set to air later in the evening when children should be asleep, but that is no excuse. Adult Swim has crossed the line by belittling the Christian religion with foul jokes. We need to send a loud and clear message to Adult Swim, its owner Turner Broadcasting System, Inc. (a Time Warner Company), and all potential advertisers of “Black Jesus” that this kind of programming is insulting and completely unacceptable. Adult Swim is not ridiculing any other religion currently and wouldn’t dream of mocking Mohammed or Muslims.

If we speak with one voice now, we can keep this program from ever seeing the light of day. Christians must take a stand and not be silent. Networks like Adult Swim continue to mock Christianity, and we will not stand for it. Christians should no longer sit idly by and allow this blasphemy to continue without speaking up in protest. “Black Jesus” is another attempt to distort the truth about Christianity. There is power in numbers! Forward this to everyone you know in a fight to keep this show off the air.

I considered posting the trailer for Black Jesus a few days ago, but decided it looked deeply unfunny and laden with the predictable cardboard cutout characters one finds in uncountable direct-to-video flops that never even see the light of middle-of-the-night basic cable. But now that the Handmaids of the Republic of Gilead have sicced the Eyes Of God upon the show, you go Black Jesus.

Previous AFA Email Campaign To Obama: Your LGBT Executive Order Has Stolen Our Religious Freedom To Be Total Douchebags
Next FAA Bans US Flights To & From Tel Aviv