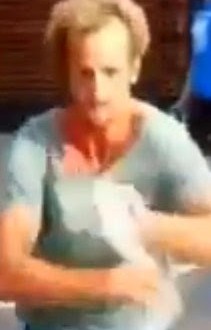 A bartender at the New York City Eagle is in critical condition after hitting his head on a Hell’s Kitchen street following a punch from an attacker yesterday. His assailant remains at large.

A dog owner was in critical condition with a fractured skull after a man knocked him to the ground with one punch during an argument over his Chihuahua, neighbors and sources said. Paul Martone, 49, was at the corner of West 55th Street and Ninth Avenue about 6:30 p.m. when a blond man stepped over his dog — which neighbors identified as Peanut — to get onto the sidewalk, offending the victim and sparking an argument, sources said. The suspect shoved Martone before punching him in the face, knocking him to the ground and then fled the scene. The attack was caught on surveillance footage. Martone’s head struck the pavement, fracturing his skull and possibly causing swelling to his brain, police said. He was in critical condition at New York-Presbyterian/Weill Cornell hospital, police said.

The NYPD is asking for the public’s help in identifying Martone’s attacker. Call their tip line at (800) 577-TIPS (8477). At present, there is no indication that the assault was a bias crime.