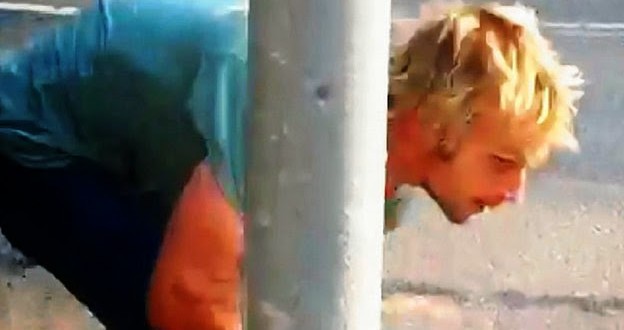 On Tuesday night. New York City Eagle bartender Paul Martone, 49, was left in critical condition after hitting his head on a Hell’s Kitchen street following a punch by a stranger with whom he had argued about his dog. Martone’s condition was upgraded to stable last night and today the NYPD reports that the attacker has been arrested.

Corey Pohan, 32, was found hiding at his mother’s Lakewood, New Jersey, home on Wednesday, after a tipster recognized him from a shocking video of the single punch that left 49-year-old Paul Martone on his back, the sources said. Martone — who hit his head on the pavement when he fell from the blow at Ninth Ave. and W. 55th St. early Tuesday — was in stable condition at New York-Presbyterian/Weill Cornell Medical Center on Thursday. The wild confrontation erupted after Pohan allegedly stepped over Martone’s pet pooch to get to the sidewalk, sources said. Martone yelled at him and pushed Pohan — who turned around and slugged Martone, knocking him to the ground. A witness used a cell phone to record the attack, which a witness recorded with a cell phone. Detectives went to New Jersey after they identified the suspect. Pohan initially surrendered and was on his way back across the Hudson River until he suddenly changed his mind and jumped out of the car near the Lincoln Tunnel, sources said. Local authorities were called to arrest Pohan, who was taken into custody at the scene.

Pohan remains in a New Jersey jail while awaiting extradition. The incident has turned into a minor social media sensation over whether Martone had instigated the confrontation.