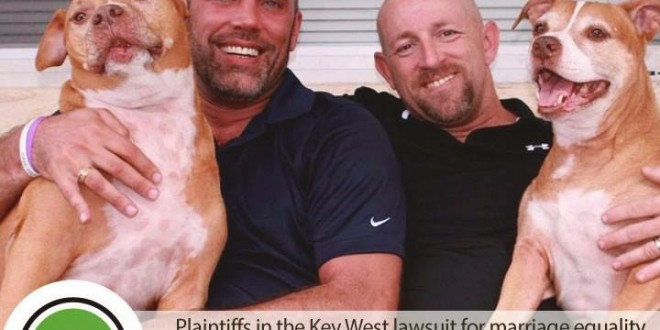 The two Key West bartenders who two weeks ago won their marriage lawsuit in a Monroe County court are petitioning to have their case heard by the Florida Supreme Court. Via the Miami Herald:

On July 17, Monroe Chief Circuit Judge Luis Garcia declared Florida’s 2008 gay-marriage ban unconstitutional, ruling against Bondi, whose office defended the ban. Huntsman and Jones have not been allowed to marry: Florida law mandates that an automatic stay pending appeal is triggered when a public official loses a court case. “We’re filing in the court of appeal, a motion, in layman’s terms, to pass through the jurisdiction of the third District Court of Appeal and to send the case directly to the Florida Supreme Court,” Restivo told the Miami Herald. “It’s going to certainly bring this case quicker to finality. It’s going to apply this case, one way or another, to the entire state of Florida, once the Supreme Court rules on it.” The Monroe County case mirrors one in Miami-Dade, in which Circuit Judge Sarah Zabel on Friday ordered that six same-sex couples also be allowed to marry. Preventing same-sex couples from marrying, Zabel said, “serves only to hurt, to discriminate, to deprive same-sex couples and their families of equal dignity, to label and treat them as second-class citizens, and to deem them unworthy of participation in one of the fundamental institutions of our society.”

Equality Case Files has the request.