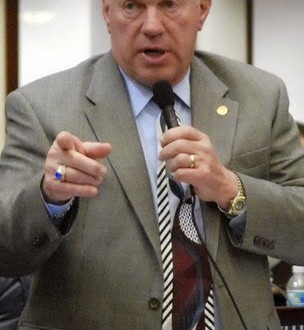 The plan is sure to draw fire from liberals not only because D’Souza is a prominent conservative but because he is also behind the movie, 2016: Obama’s America, which is a profoundly negative take on Democratic U.S. president Barack Obama. America, the movie, espouses a conservative point of view toward telling history. D’Souza takes on leftist arguments that portray the U.S. in a negative light, and he specifically attacks Howard Zinn, author of the book A People’s History of the United States, often considered the most widely used history book in U.S. academia. The movie shows actors Matt Damon and Woody Harrelson praising the book. Hays said the purpose of his proposal is to introduce more balance into Florida schools. “I saw the movie and walked out of the theater and said, ‘Wow, our students need to see this.’ And it’s my plan to show it to my colleagues in the legislature, too, before they’re asked to vote on the bill,” Hays said. Those who oppose the plan are also likely to point out that D’Souza could be headed to prison after he pleaded guilty to illegally promising to reimburse some people who donated to a friend’s Senate campaign. D’Souza faces up to two years for that transgression and he will be sentenced in September.

Here’s a trailer for the film.