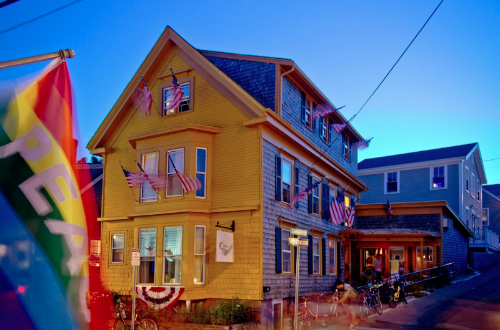 After a successful launch last year, Daddy Days is returning to Provincetown for the week of August 10th – 17th. The event is again sponsored, unsurprisingly, by the website DaddyHunt. Via press release:

“The success of last year’s DaddyDays showed us how much we needed an event like this,” says Carl Sandler, founder of Daddyhunt. “Love and sex aren’t limited by age. With Daddy Days, we bring together not only daddies and daddy hunters, but guys that enjoy a broader definition of community. It’s an incredible week, and we’re excited to see it grow.” Provincetown Daddy Days kicks off on Sunday with a sweaty, sexy dance party at the historic Gifford House. Events continue throughout the week, including parties at the Vault, Crown & Anchor, Paramount and the Brass Key. For the second year in a row, the center of the action will be at the host hotel — Crew’s Quarters on Commercial Street. “2014 is the Year of the Daddy,” says Sandler. “From Dustin Lance Black and Tom Daley in the news to Dom and Lynn on Looking, gay men are seeing that sex appeal only grows with age.”

At this year’s Bear Week, several of my friends estimated the average age of the attendees as in the mid-high 40s. I’m told that last year’s Daddy Days drew a slightly older crowd.

RELATED: DaddyHunt was founded by Chris Turner, who met his husband Armistead Maupin through his own site. Turner sold the site several years ago.