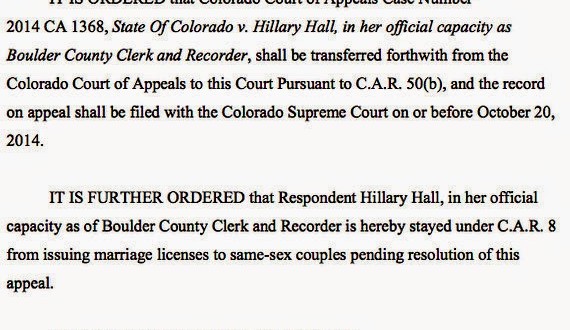 After Boulder County Clerk Hillary Hall had been issuing marriage licenses to same-sex couples for more than a month, the Colorado Supreme Court on Tuesday ordered her to stop doing so for the time being. Hall’s office reported Tuesday that it granted 202 licenses to same-sex couples since starting doing so last month. “I am disappointed by the Colorado Supreme Court’s stay, but I will comply with the order,” Hall said in a statement. “Given the avalanche of recent cases determining that same-sex marriage bans are unconstitutional, I am hopeful the stay will be short-lived and that we will be able to resume issuing licenses soon.”