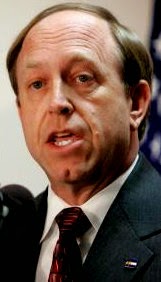 “Permitting one clerk to ignore some state laws while using the power granted by other state laws causes significant irreparable harm to the state and the public interest. Each day that one clerk continues to issue same-sex marriage licenses — and publicly declare those licenses’ validity, despite the state marriage laws and the attorney general’s statements to the contrary — greater social and legal chaos ensues because the public is left confused and uncertain about the legal validity of such marriages and the role of clerks versus the role of the courts or other government officials in determining whether to enforce state law.” – Colorado Attorney General John Suthers, in a filing to the state Supreme Court in which he demands that Boulder County Clerk Hillary Hall be forced to stop issuing same-sex marriage licenses. Hall has issued 199 such licenses as of yesterday.

Colorado Attorney General John Suthers is asking the state Supreme Court to force the Boulder County clerk to stop issuing marriage licenses to gay and lesbian couples, arguing she’s causing Coloradans to lose faith in their government. In an unusual motion filed late Sunday evening, Suthers acknowledged that a federal judge last week declared unconstitutional the state’s ban on same-sex marriage, but said the U.S. Supreme Court ultimately needs to decide. The federal judge who struck down that ban last week also said his order wouldn’t go into effect for a month, giving higher courts time to review it. The Colorado Supreme Court has already ordered the Denver County clerk to stop issuing marriage licenses to same-sex couples, but that ruling didn’t apply to Boulder. Hall said she would abide by the state supreme court’s ruling.

Yesterday Suthers also filed a stay request with the Tenth Circuit Court of Appeals. Hit the link for the full filing.