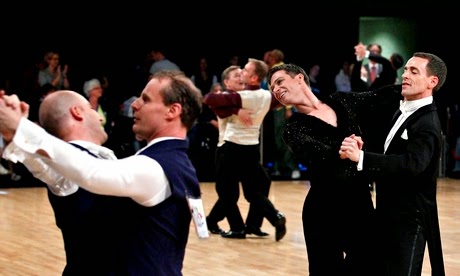 BRITAIN: Same-Sex Couples Could Be Banned From Ballroom Dancing

It is a pursuit that – behind the glitz, sequins and sashays – is known for fierce rivalries and cut-throat determination. But the strain behind the smiles in the world of ballroom dancing is beginning to show, as its governing body pushes to ban same-sex couples from ballroom dance competitions, provoking outrage among competitors. The British Dance Council is to consider proposals that would define a dance partnership as having to consist between a man and “a lady” on 21 July, just before a major competition in Bournemouth. If it is passed, it will ban same-sex couples from mainstream contests, regulating them to same-sex-only categories.

It is currently not specified that partners in competitions must come from opposite sexes, and two women dancing together has long been a commonly accepted practice. The best known same-sex pair on the ballroom dancing scene are perhaps Bradley and Soren Stauffer-Kruse, the married gay couple better known as the Sugar Dandies, who were semi-finalists on Britain’s Got Talent in 2012. Although there are only a handful of same-sex couples competing, the number is increasing, said the human rights campaigner Peter Tatchell, who is supporting the campaign against the rule change.

Previous Olympian Ian Thorpe Comes Out
Next World Health Organization: ALL Gay Men Should Be On Anti-Retroviral Drugs