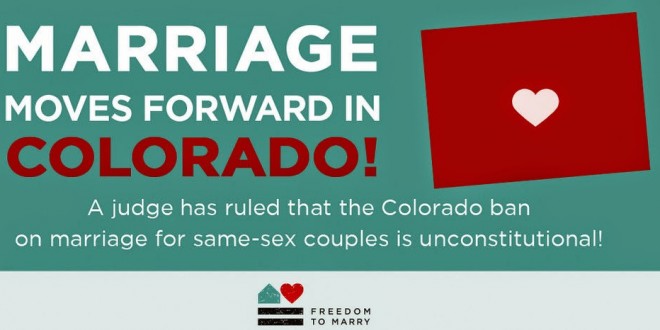 The Adams County District Court judge overseeing a lawsuit challenging Colorado’s same-sex marriage ban declared the ban unconstitutional on Wednesday but stayed his ruling. The ruling makes Colorado the latest in a string of states that have seen their bans on same-sex marriages tossed out by state and federal judges. The ruling came as another judge in Boulder County considered a request by Attorney General John Suthers to stop a county clerk from issuing marriage licenses to same-sex couples. Last week, attorneys filed a federal lawsuit seeking to challenge Colorado’s gay marriage ban. Adams County District Court Judge C. Scott Crabtree issued his ruling Wednesday afternoon, but he issued an immediate stay. Attorneys for 18 plaintiffs — nine couples — from Denver and Adams counties argued that the state’s voter-approved ban on same-sex marriage violates the U.S. Constitution.

Yet another court has concluded that there is no good reason for denying gay couples the freedom to marry, and has found marriage discrimination unconstitutional. It is time that Colorado’s gay couples and their loved ones be able to share in the joy and security that marriage brings, and time for the Supreme Court to bring the freedom to marry home nationwide. Every day of denial is a day of wrongful deprivation. Today’s latest victory in the Mountain West shows that all of America is ready for the freedom to marry.

“I am thrilled that Judge Crabtree has recognized that the Colorado ban on same sex marriage is a violation of due process and equal protection guarantees under the Fourteenth Amendment. More than that, he has recognized, as many of his peers across the country have, that marriage should be an institution of love and commitment, not prohibition and discrimination. I look forward to his ruling being upheld by the higher courts, and am confident marriage equality in Colorado is within sight.”

Today, all across Colorado, committed same-sex couples who have waited for years, even decades, are closer than ever before to having the freedom to say those two magical words—‘I do’—here in the state we all call home. Today’s ruling, combined with the earlier decision of the 10th Circuit Court of Appeals, leaves no room for doubt that Colorado’s ban on marriage for same-sex couples is unconstitutional and indefensible. With court after court recognizing the freedom to marry, their decision should be a simple and immediate one. We call on Colorado Attorney General John Suthers and the other defendants to let today’s historic ruling stand and to drop, once and for all, their defense of Colorado’s unconstitutional marriage ban. It’s only a matter of time before wedding bells will be ringing all across the state. We recognize the determination and resolve of the couples and attorneys who brought this suit and everyone else who has worked hard, fought, and sacrificed to make today’s historic ruling a reality.