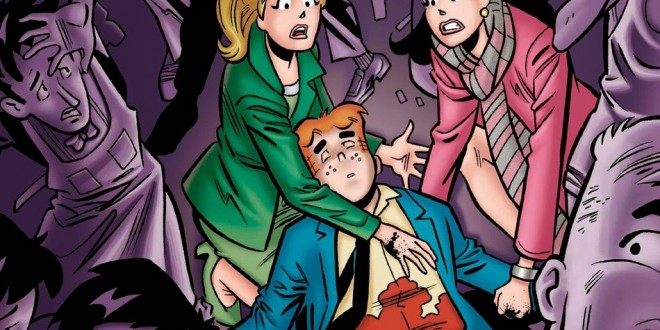 Mashable has the story:

Archie Andrews will die taking a bullet for his gay best friend. The famous freckle-faced comic book icon is meeting his demise in Wednesday’s installment of “Life with Archie” when he intervenes in an assassination attempt on Kevin Keller, Archie Comics’ first openly gay character. Andrews’ death, which was first announced in April, will mark the conclusion of the series that focuses on grown-up renditions of Andrews and his Riverdale pals. “The way in which Archie dies is everything that you would expect of Archie,” said Jon Goldwater, Archie Comics publisher and co-CEO. ” He dies heroically. He dies selflessly. He dies in the manner that epitomizes not only the best of Riverdale but the best of all of us. It’s what Archie has come to represent over the past almost 75 years.” Keller’s character first joined Veronica Lodge, Betty Cooper, Jughead Jones and Reggie Mantle in the Archie Comics spin-off “Veronica” in 2010. He later appeared in his own solo title. In “Life with Archie,” Keller is a married military veteran and newly elected senator who’s pushing for more gun control in Riverdale after his husband was involved in a shooting.

The wingnuts are gonna scream. (Tipped by JMG reader Murray)