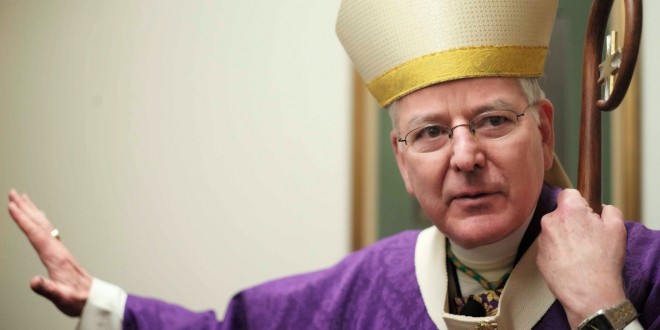 Early this month it was disclosed that the Archdiocese of St. Paul & Minneapolis was investigating claims that scandal-plagued Archbishop John Nienstedt has had “inappropriate sexual relations” with priests, seminarians, and other men. Today the Minneapolis StarTribune asked him point blank:

Nienstedt said he believed that the investigation involved five allegations of sexual impropriety, including from the time he served in the Detroit Archdiocese in the 1990s. The allegations were made by priests and seminarians. The archbishop denied that he was a homosexual or engaged in homosexual acts. “I’m not gay,” he said. “And I’m not anti-gay.” When he led the charge for a constitutional amendment to ban same-sex marriage in Minnesota in 2012, he said he was only arguing that marriage should be between a man and a woman. “It wasn’t to put down people with same-sex attractions,” he said. When asked why Catholic priests and seminarians alleged he had same-sex attraction, Nienstedt responded, “I have no idea.” “But I made a lot of enemies by the stands I’ve taken in Detroit and here,” he said. “I assume it feeds into that.” Nienstedt didn’t know when the investigation would be complete. However, when it is, he said it would be sent to the papal nuncio in Washington, D.C., and a “statement will be made.” He didn’t know if the report would be made public.

Nienstedt is refusing to step down despite widespread outrage over evidence that he shielded pedophile priests from prosecution. Dozens of lawsuits have been filed against the archdiocese and Nienstedt says that other bishops have advised him to consider declaring bankruptcy, presumably in order to evade paying any judgments.