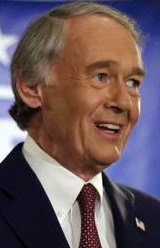 Sen. Ed Markey (D-MA) has introduced a bill that would create a special US envoy for LGBT rights abroad. J. Lester Feder reports at Buzzfeed:

The bill, titled “The International Human Rights Defense Act,” was formally introduced in the Senate on Thursday along with more than 20 co-sponsors, all Democrats. “For the United States to hold true to our commitment to defending the human rights of all people around the world, we must stand with the LGBT community in their struggle for recognition and equality everywhere,” Markey said in a statement to BuzzFeed. “By fostering a coordinated effort across the federal government and relevant agencies, we can meet the enormous challenge before us and work to ensure equality for all people around the globe.” If it passes, this would signal how much U.S. foreign policy has changed under President Barack Obama. The diplomatic team of President George W. Bush had helped block efforts to make LGBT rights a priority for the human rights bodies of the United Nations.

The bill has already been endorsed by more than a dozen human rights groups including the HRC. It faces dim prospects in the House.

Previous Headline Of The Day
Next GOP Launches New Campaign: Another Clinton In The White House Is Nuts