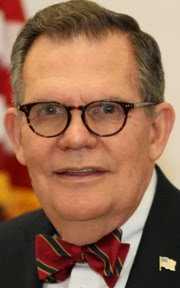 Following last year’s overturn of Prop 8, San Diego County Clerk Ernie Dronenburg filed a petition with the California Supreme Court asking that most state clerks be barred from issuing marriage licenses to same-sex couples. According to Dronenburg, the SCOTUS ruling only applied to the two counties, Alameda and Los Angeles, where the Prop 8 plaintiffs lived. Dronenburg’s action was endorsed by NOM, who called him “courageous.”

Dronenburg is now up for reelection and according to a just-released poll, his opposition to marriage equality might cost him his job.

With less than a week to go until the primary election, more than 4 in 10 people are still undecided on who they will vote for in the San Diego County clerk race, according to a new 10News poll conducted by SurveyUSA. The poll results released Friday found that 44 percent of the likeliest voters were unsure on which way they leaned in the race between incumbent Ernie Dronenburg and challenger Susan Guinn. Among decided voters, Dronenburg held a narrow 21 to 19 percent lead over Guinn, a statistically insignificant lead. But according to the poll, it’s the gay marriage issue that could decide the race. When asked whether Dronenburg’s decision last year to issue a stay on issuing marriage licenses to same-sex couples impacted their vote, 41 percent of respondents said yes and 39 percent said no. 18 percent said the impact was minor. Guinn, who is married to her partner and sits on the board of Equality California, said, “People don’t want politicians who abuse their office for their own political agenda. But this race isn’t about gay marriage. We don’t want a career politician who isn’t doing his job.”

Neither candidate is expected to get the 50% required to avoid a runoff. The primary is Tuesday.