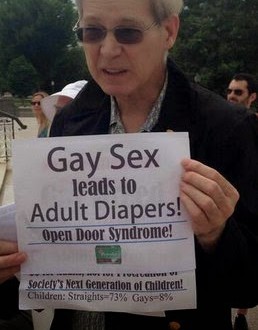 “They’re not born with it, you know. If anybody opens the back door unnaturally from outside, you end up having open-door syndrome. You can’t close the door. Anal sex harms [gays]. It reduces their life by, on average, 25 years—anal or oral sex. Uh, it also has an impact—a strong impact [on women]. I’m not certain the exact statistics there.” – NOM hate march attendee Morton, in a Yahoo/Daily Beast story that is drawing outrage from Christian commenters. Also interviewed in the above-linked story is an attendee named Gwendolyn, who told the reporter that “she saw angels fly down into the Supreme Court. Gwendolyn wore an angel
pin on her breast, which she explained was an actual angel and sent to
her directly from God.”

Previous NOM: 10,000 Attended Our Hate March
Next Frothy Mix At NOM’s Hate March: Gay Marriage Is Bad For The Economy