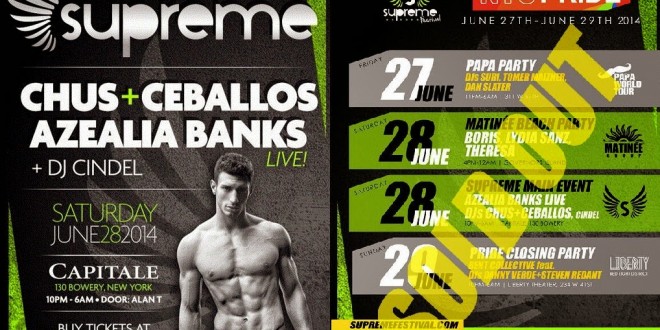 Via press release from NYC Pride:

Judge Colleen McMahon of the United States District Court for the Southern District of New York has issued a preliminary injunction against Matinee NYC, Voss NYC and their proprietors Brandon Voss and Jake Resnicow, barring them from using Heritage of Pride/NYC Pride’s “NYC Pride” trademarks, trade name and logo in connection with, among other things, concerts that are scheduled to take place during New York’s Pride Week, which takes place from June 22 to 29, 2014. Heritage of Pride, which owns the rights to several NYC PRIDE trademarks, had filed suit against the defendants on June 10, 2014, alleging that their use of “NYC Pride” in connection with concerts and events that they were promoting for Pride Week infringed its trademarks and related rights. “Although NYC Pride had hoped to resolve this matter without having to resort to legal action, we are grateful to the Court for its decision and pleased that we have been able to protect the NYC Pride trademarks during the key Pride Week period,” said Chris Frederick, Managing Director of NYC Pride. Since 1984, Heritage of Pride has organized New York City’s official slate of events commemorating the Stonewall Riots of 1969, which are often cited as the start of the modern gay rights movement. This year marks the 45th Anniversary of the Stonewall Riots.

Good for NYC Pride. It has long been a pet peeve of mine when outside promoters glom onto successful non-profit events, draining away attendance and revenue by using terms like “main event” and “official” and even more maddeningly, the actual name of the founding organization. Many years ago such crass tactics destroyed the Hotlanta River Expo and very nearly sank the Winter Party. If promoters want a piece of the business and tourism traffic that the founding organization has worked (sometimes for decades) to create, the very least they can do is respect their actual name.

Previous PBS: The Tide Is Turning On Marriage
Next NOM: 10,000 Attended Our Hate March