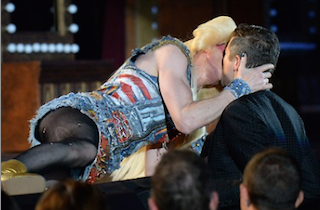 NPH As Hedwig At The 2014 Tony Awards

Neil Patrick Harris effectively stole the 2014 Tony Awards with his performance of “Sugar Daddy” from Hedwig and the Angry Inch. During the song, Harris ventured into the audience at Radio City Music Hall where he proceeded to take off Samuel L. Jackson’s glasses and lick them before grinding on the laps of Sting and Kevin Bacon. Harris capped thing off the show-stopping number by leaning off the front of the stage and planting a passionate kiss on his husband, David Burtka, who was seated in the first row.