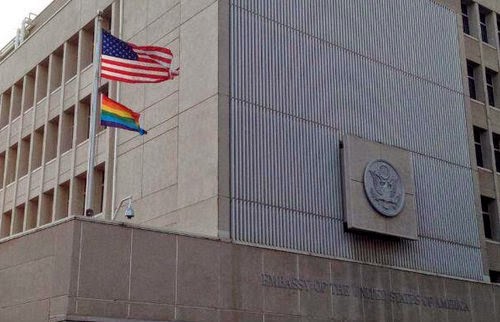 From the Facebook page of the US Embassy in Tel Aviv: “Proudly flying the colors! For the first time in history, the U.S. Embassy in Tel Aviv has raised the Pride flag together with our American flag. We are proud to join with the municipality of Tel Aviv-Yafo and its residents in celebrating LGBT Pride Week.”

Fox News reporter Todd Starnes is very upset: “So the Obama Administration publicly endorses and affirms the gay rights movement. Meanwhile, American military personnel are being ordered to remove Bibles from their desks and Bible verses from their walls — lest they be accused of publicly endorsing or affirming Christianity. Some might call that a double-standard.”

From one of Starnes’ fans.

Crackpot Pastor Paul Begley says that flying the flag over an embassy in Israel is totally a final sign of the end times.

RELATED: Hit the embassy’s Facebook page and say thanks.