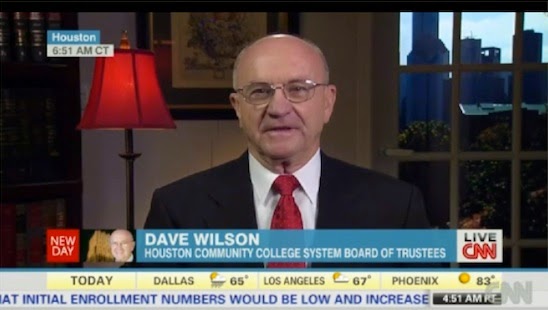 Except as required by State or Federal law, the City of Houston shall only define “Gender Identity” as an individual’s innate identification, as either male or female, which is assigned at birth. Perceived gender Identification is not allowed in defining “Gender identity”. Furthermore, the City of Houston shall require entities doing business with the city to adopt the same definition of “Gender identity”. If any portion of this proposed Charter amendment is declared unlawful, then such portion shall be removed and the remainder of the Charter amendment will remain in effect. Any ordinance or executive order in conflict with this section of the Charter is hereby repealed and declared invalid.

Wilson is locally infamous for pretending to be black in order be elected to a community college board of trustees.

As a conservative white Republican running in a district whose voters are overwhelmingly black Democrats, the odds seemed overwhelmingly against him. Then he came up with an idea, an advertising strategy that his opponent found “disgusting.” If a white guy didn’t have a chance in a mostly African-American district, Wilson would lead voters to think he’s black. And it apparently worked. In one of the biggest political upsets in Houston politics this election season, Wilson — an anti-gay activist and former fringe candidate for mayor — emerged as the surprise winner over 24-year incumbent Bruce Austin. His razor thin margin of victory, only 26 votes, was almost certainly influenced by his racially tinged campaign. “Every time a politician talks, he’s out there deceiving voters,” he says. Wilson, a gleeful political troublemaker, printed direct mail pieces strongly implying that he’s black. His fliers were decorated with photographs of smiling African-American faces — which he readily admits he just lifted off websites — and captioned with the words “Please vote for our friend and neighbor Dave Wilson.”