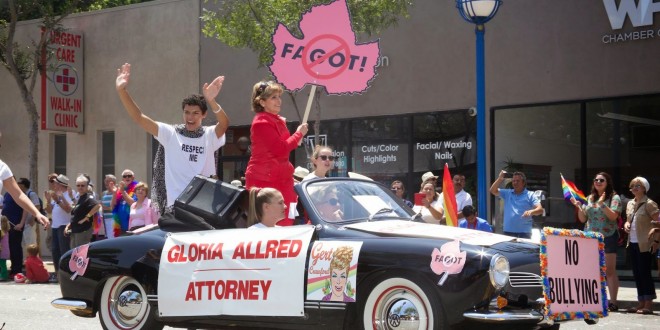 A lawsuit filed Friday against the Los Angeles Unified School District by a former student alleges administrators failed to intervene when he was bullied and taunted for months last year about his sexuality. The lawsuit, filed in Los Angeles County Superior Court, alleges sexual orientation discrimination, harassment based on sexual orientation and negligence. James Anthony Scott, identified as Shear, is “seeking damages according to proof at trial,” according to a statement from his attorney, Gloria Allred. Shear was a 15-year-old sophomore at Daniel Pearl Magnet High School in Van Nuys when he witnessed an autistic student being harassed by peers, according to the suit. Shear alerted administrators to the situation, the suit says, and then the bullies turned on him.From August to December, the lawsuit claims Shear was subjected to slurs about his sexual orientation and was pushed in a school hallway.

Among the abuses that the student claims he suffered was a note placed in his locker which read “Get out fagot or die.” It’s not clear why Allred’s sign appears to be in the shape of a maple leaf. (Photo credit: Matt Baume)