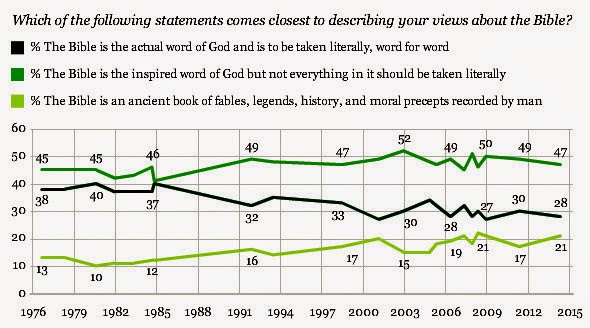 The latest from Gallup:

Twenty-eight percent of Americans believe the Bible is the actual word of God and that it should be taken literally. This is somewhat below the 38% to 40% seen in the late 1970s, and near the all-time low of 27% reached in 2001 and 2009. But about half of Americans continue to say the Bible is the inspired word of God, not to be taken literally — meaning a combined 75% believe the Bible is in some way connected to God. About one in five Americans view the Bible in purely secular terms — as ancient fables, legends, history, and precepts written by man — which is up from 13% in 1976.