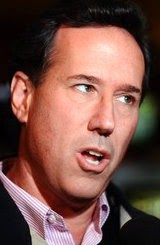 Frothy Mix: Sorry About That Judge

Former Sen. Rick Santorum has finally weighed in on having endorsed the judge that overturned Pennsylvania’s ban on same-sex marriage.

When asked about Jones Friday by The Huffington Post, Santorum said, “We’re all entitled to a mistake.” His comments came after his speech at the Road to Majority Conference, a gathering of social conservatives sponsored by the Faith and Freedom Coalition. In March 2002, Santorum called Jones “highly qualified to assume the important role of Judge and the duty of protecting the Constitution and ensuring the effective operation of our judicial system.” Santorum was significantly less generous toward the judiciary Friday. “The court has to stop being the judge and jury for the consciousness of America,” he said. “That’s not what the court’s supposed to be. The court’s supposed to uphold the Constitution, not change the Constitution based on what they think is the current mood of the day.” Santorum didn’t seem to have many more ideas Friday on how same-sex marriage opponents might stop the trend toward legalization, simply saying people should “go out there in the popular culture and go out there in the political system and continue to work.”

RELATED: Santorum’s speech at NOM’s hate march was translated into Spanish by the same New York pastor who translated the call for executing homosexuals during NOM’s 2011 hate march in the Bronx.