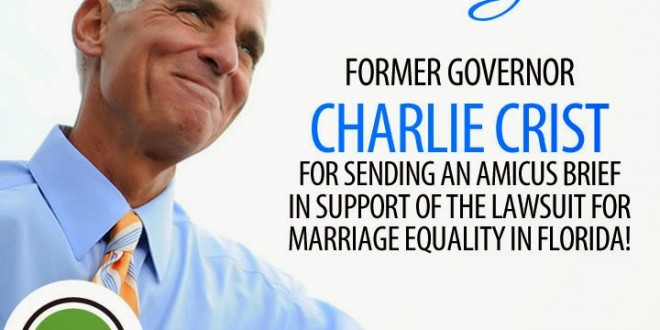 Former Florida Governor Charlie Crist has filed an amicus brief today in support of the marriage equality lawsuit Pareto v. Ruvin, which is set for a hearing on July 2 before Judge Sarah Zabel in the Eleventh Judicial Circuit Court in Miami. Judge Zabel will hear from attorneys who filed a lawsuit in January on behalf of six same-sex couples and Equality Florida Institute. The lawsuit argues that Florida’s laws barring same-sex couples from marriage violate the United States Constitution by denying them the legal protections and equal dignity that having the freedom to marry provides. In the brief, Crist stated that as a former Governor and Attorney General who previously supported the ban, he is in a unique position to provide the court a perspective on why it is wrong, harmful to Florida and harmful to gay couples and children who are denied the protections only marriage provides. Crist is among the fast growing majority of Floridians, 57% currently, who have come to support full marriage equality.

Also filing pro-gay briefs are the mayors of Orlando and Miami Beach. The lead counsel for the plaintiffs is National Center for Lesbian Rights attorney Shannon Minter. On Wednesday, Florida Attorney General Pam Bondi filed a motion to intervene on behalf of the state as Miami-Dade County Clerk Harvey Ruvin is not “actively defending” against the suit. Earlier this month the above-named judge denied the Liberty Counsel’s motion to intervene on behalf of three local anti-gay Christian groups.

Could Florida be next? I think we’ve got a good shot.

RELATED:  According to poll released this week, Crist is currently tied with Gov. Rick Scott in the 2014 gubernatorial race.