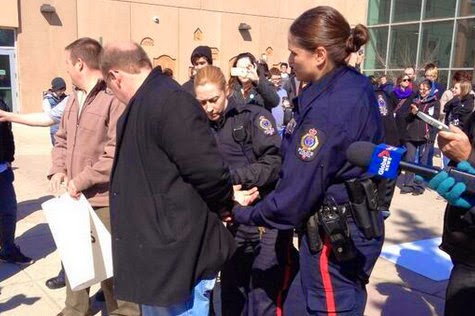 From the Regina Leader-Post:

Two anti-gay advocates entered not guilty pleas on Monday regarding an incident on the University of Regina campus in April. The not guilty pleas for mischief for Bill Whatcott and Peter LaBarbera were entered by Weyburn lawyer Michael Weger. The matter is scheduled to be back in Regina Provincial Court on June 23 to set a trial date. Whatcott and LaBarbera were arrested on April 14 after refusing to leave the U of R campus when ordered to do so by security and the Regina Police Service. Whatcott and LaBarbera set up an anti-abortion display on campus and handed out anti-LGBT literature, deemed by university officials as potentially harmful to members of the university community.

They could have pleaded guilty and paid a fine that would surely be the equivalent of a traffic ticket. But since they staged their arrest in the first place, that wouldn’t have worked with the whole grand Martyr For Jesus™ scheme. (Tipped by JMG reader Lynda)