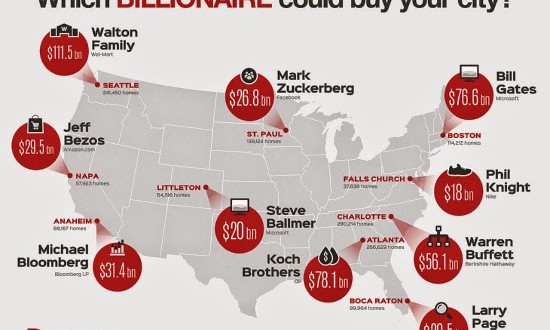 Billionaires Could Buy These Cities

The Redfin Research Center has compared the median home prices in major US cities to the estimated wealth of well-known billionaires.

Just how rich is Bill Gates? According to Forbes, he’s the world’s richest person and is worth $77.5 billion. But that kind of wealth is hard to wrap your head around, so let’s put it another way: Gates could buy every single home in the entire city of Boston. That’s 114,212 single-family homes, condos and townhouses, at a total purchase price of $76.6 billion. Given that the average American struggles to afford a home, we wanted to illustrate just how many homes the wealthiest among us could buy. In this fictional real estate investment, the 30 billionaires on our list, with a combined fortune of $582 billion, could afford to own a staggering 6 percent of the total U.S. home equity.”