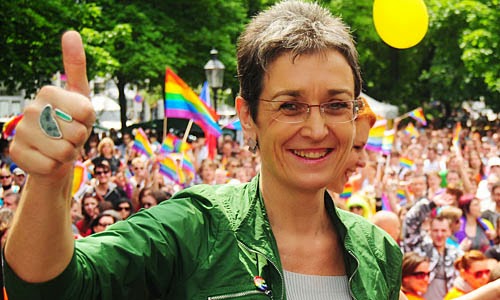 Austria’s first openly gay politician, leader of the Austrian Greens’ delegation to the EU parliament Ulrike Lunacek was the apparent victim of an attack at Friday’s annual Rainbow Parade in Vienna. An unknown assailant sprayed butyric acid at the politician as she was giving an interview on the sidelines of the parade. Lunacek and the interview team were not injured. The acid damaged the Greens MP’s clothes and the camera equipment. According to police spokeswoman Barbara Riehs, the acid caused around €50,000 worth of damage to the electronic equipment. The attacker had not yet been found on Sunday.

Wikipedia notes that butyric acid is commonly used in so-called “stink bombs” as it is the main distinctive smell in human vomit. It can cause painful blisters and blindness. (Via Towleroad)