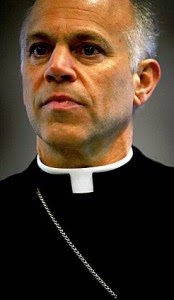 Archbishop Cordileone: YOU People Are The Haters, I’m Going To NOM’s March

Last week dozen of prominent politicians and faith leaders sent a letter to San Francisco Archbishop Salvatore Cordileone, urging him not to attend NOM’s hate march in Washington DC. Yesterday Cordileone responded to them with a letter of his own. Here’s an excerpt:

It gives me assurance that we share a common disdain for harsh and hateful rhetoric. It must be pointed out, though, that there is plenty of offensive rhetoric which flows in the opposite direction. In fact, for those who support the conjugal understanding of marriage, the attacks have not stopped at rhetoric. Simply for taking a stand for marriage as it has been understood in every human society for millennia, people have lost their jobs, lost their livelihoods, and have suffered other types of retribution, including physical violence. It is true that historically in our society violence has been perpetrated against persons who experience attraction to members of the same sex, and this is to be deplored and eradicated. Sadly, though, we are now beginning to see examples, although thankfully not widespread, of even physical violence against those who hold to the conjugal view of marriage (such as, most notably, the attempted gunning down of those who work in the offices of the Family Research Council). While it is true that free speech can be used to offend others, it is not so much people exercising their right to free speech that drives us further apart than people punished precisely for doing so that does.

Cordileone also denies that NOM has “connected pedophilia” to homosexuality, but ignores the fact that leader of the Family Research Council, whom he mentions one paragraph earlier, has often done exactly that.  The FRC is a co-sponsor of NOM’s hate march.

RELATED: Cordileone is known as the “father of Prop 8.”

As an auxiliary bishop in San Diego, Cordileone played an indispensable role in conceiving, funding, organizing, and ultimately winning the campaign to pass Proposition 8. It was Bishop Sal and a small group of Catholic leaders who decided that they had to amend the state constitution. It was Bishop Sal who found the first major donor and flushed the fledgling campaign with cash. It was Bishop Sal who personally brought in the organization that took the lead on the petition drive. And it was Bishop Sal who coordinated the Catholic effort with evangelical churches around the state. Bishop Sal even helped craft the campaign’s rhetorical strategy, sitting in on focus groups to hone the message of Proposition 8. We know all this because as homosexuals and their supporters were wondering how this all came about, Cordileone gloated about his work in an interview with an obscure Catholic radio network. He bragged about how gay men and lesbians never saw him coming and called gay marriage a Satanic plot by “the Evil One” to destroy morality in the modern world.