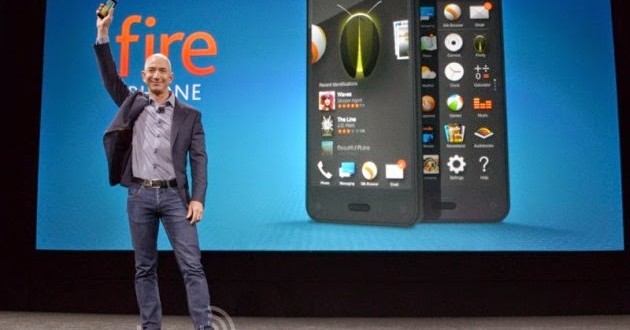 The Fire Phone has a 4.7-inch HD display, aluminum buttons, a Qualcomm processor, Adreno 330 graphics, and 2GB of RAM. Bezos talked a lot about the phone’s build, from the injection-molded connectors to the chamfered edges. There’s a set of stereo speakers that Bezos promised are better than your average phone, and a set of headphones he swears that won’t tangle. (That last bit sounds impossible, but we’ll have to wait and see.) There’s also a 13-megapixel camera, an f/2.0 lens, and optical image stabilization. Bezos compared the Fire Phone to the iPhone 5S and the Samsung Galaxy S5, saying that no matter the situation the Fire Phone will take better shots. There’s a quick-access shutter button on the side, and unlimited cloud storage for your photos. That’s where Amazon has an advantage, really, its ability to do cloud storage cheaply and well.

Amazon’s first ever phone has a 4.7-inch Gorilla Glass display with a HD resolution screen (we’re assuming it’s 720p). That makes it the same size as the Moto X, which was also supposed to be a phone for the masses. It also has a rubberized frame with aluminium buttons, a quad-core 2.2GHz processor, Adreno 330 GPU and 2GB of RAM. As for the camera, there’s a 13-megapixel rear-facing one equipped with a f/2.0 lens and optical image stabilization. The phone’s display will have 590 nits of brightness, dynamic image contrast and a “circular polarizer,” though we’re not entirely clear on what that means yet. There’s also a dedicated camera key and luckily for all you amateur photogs, it’ll come with unlimited cloud storage for photos as well. It’s available from AT&T for $199 if you want the 32GB version, or $299 if you prefer the 64GB. If you’d rather go off-contract instead, you can get phone directly from Amazon for $649 for 32GB and $749 for 64GB.

The phone has already appeared on the Amazon site, but the product links aren’t live at this writing. The shipping date is listed as July 25th.