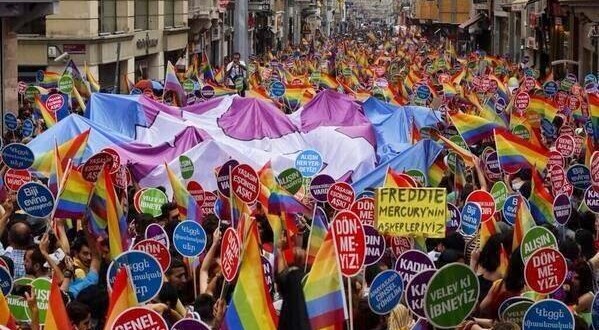 100K Turn Out For Istanbul Pride

More than 100, 000 people gathered in Istiklal Avenue in Istanbul to celebrate the 22th Pride Parade for the LGBT community on the 29 June, under some strict security measures by the police who blocked the roads to Taksim Square and Gezi Park with water cannons since early morning. Community members, as well their families and loved ones participated in the parade, chanting for the freedom for same-sex marriage and against homophobia. They carried banners that said, “Unconditional Love is Possible.” Most attendees appeared in the parade in glamorous costumes adorned with the colours of the international flag of the community. The crowd shouted slogans against fascism and capitalism, as well, saying ‘Be gone AKP!’ and ‘Legs up Against Fascism!’ and ‘Down with all the shopping centers!’