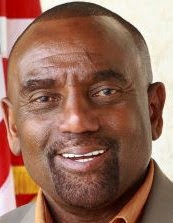 “Millions of American families were caught off-guard by the disturbing televised image of black football player Michael Sam and his ‘boyfriend,’ Vito Cammisano, mouth kissing after the St. Louis Rams drafted Sam. The liberal press is celebrating Sam for being the first openly gay player in the NFL. The world has become one upside-down place! Christians are being slammed while homosexuals are being lifted up. I don’t know how Christian men can watch the NFL after the league’s cavalier disregard for decency and after the punishment they’re dishing out to players who exercise their freedom of speech. If you’re still spending money on games, souvenirs and supporting the NFL brand and you call yourself a Christian, you’re a liar and the truth is not in you! We do have the power to say ‘no’ and stop evil if we’ll unite and stand for what is right.” – Rev. Jesse Lee Peterson, writing for World Net Daily.