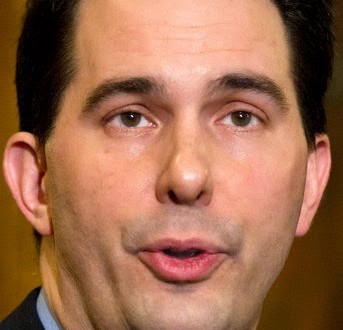 Gov. Scott Walker backed away from his previous support for the state ban on gay marriage passed in 2006, saying he didn’t know if it violated the U.S. Constitution, would still be approved by voters today or would amount to a big change for the state’s values and economy if overturned. Making clear he wanted no part of this legal battle in an election year, the Republican governor said he was focused on other priorities. Though as governor Walker is one of the defendants in the lawsuit, he said gay marriage was an issue for [Attorney General] Van Hollen and the federal judge, not him. “Any federal judge has got to look at that law not only with respect to the state’s constitution but what it means in terms of the U.S. Constitution, as well. Again, I’m not going to pretend to tell a federal judge in that regard what he or she should do about it,” Walker said. “…I don’t know what (allowing gay marriage) means. Voters don’t talk to me about that. They talk to me about the economy. They talk to me about their kids’ schools.” It was a rare moment of uncertainty for Walker, who thrives on taking firm stances on controversial questions.