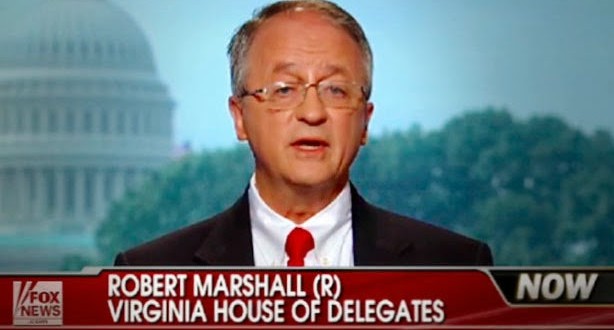 Anti-gay Virginia state Del. Bob Marshall has been rebuffed by his own party in his campaign to impeach Attorney General Mark Herring for refusing to defend his state’s marriage ban.

House Speaker Bill Howell (R) immediately denied Marshall’s resolution when it was first submitted and released a short statements saying he “does not believe impeachment is an appropriate or practical recourse at the moment.” Marshall then blamed his own party’s higher-ups for not challenging the AG’s actions. “The failure of the republican leadership to address his first violation of the constitution has led to more [violations].” Marshall had hoped the impeachment inquiry would have “the other delegates look and see if Mark Herring is following the procedures proscribed of him in the Virginia constitution.” Though he admits he “didn’t calculate” the possibility of his resolution being turned down.

RELATED: Marshall’s bid for the US House has been endorsed by Phyllis Schlafly. Virginia’s primary is June 10th.

PREVIOUSLY ON JMG: In January Marshall filed an amendment that would grant Virginia state legislators the right to claiming standing in marriage lawsuits. In September 2013, Marshall petitioned the US Supreme Court to overturn Virginia’s legalization of sodomy. In May 2012, Marshall attempted to block the appointment of an openly gay state judge because the nominee has “an illegal husband.” In 2011 Del. Bob Marshall claimed it is a felony for a state office to fly the rainbow flag. Marshall has also called on Virginia to issue its own currency, and has claimed that God punishes women who have abortions by giving them deformed children. After the DADT repeal bill passed, Marshall tried to have gays banned from the Virginia National Guard.