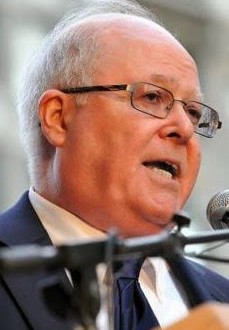 A reliable source who wishes to remain anonymous today tipped me that Catholic League blowhard and anti-gay activist Bill Donohue has submitted himself to be named the head of the New York City St. Patrick’s Day Parade.  According to my source, the other leading candidate is Quinnipiac University president John Lahey, who is thought to be a more moderate voice that might be agreeable to finally allowing LGBT groups to march openly in the parade. Current St. Patrick’s Day Parade head John Dunleavy, a retired bus driver, is reportedly under pressure to step down after decades of running the event.

This year’s parade made international news after Guinness beer suspended its sponsorship over the exclusion of LGBT groups. Donohue has launched a boycott of Guinness in response, promising to make the beer maker “suffer,” and he recently claimed to have the support of the Knights Of Columbus. Should Donohue be put in charge of the parade, the repercussions would make the Guinness flap seem like a trivial tempest as few corporations would be willing to align themselves with such a notorious bigot. The 253 year-old New York City parade is the world’s largest and draws millions of spectators.

I’ll tweet this post to Donohue and see if he is willing to confirm putting himself forward to be named chairman at last week’s meeting of the St. Patrick’s Day Parade committee.

RELATED: During New York state’s marriage equality battle, Donohue declared that gay people don’t deserve to be married because people are still getting AIDS.  In 2010 Donohue said that the Catholic Church “doesn’t have a pedophile problem, it has a gay problem.” Many more of Donohue’s foul comments about the LGBT community can be found here.

Previous TRAILER: Such Were Some Of You
Next Lion Cubs Pass National Zoo Swim Test