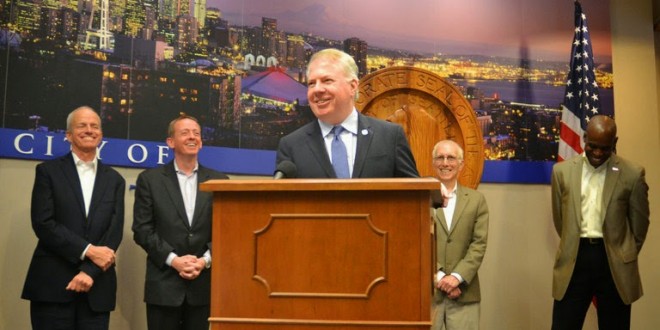 Openly gay Seattle Mayor Ed Murray has struck a deal with local labor groups that could result in a $15/hour minimum wage, which would be the highest in the nation. Via the Associated Press:

The mayor’s proposal gives businesses with more than 500 employees nationally at least three years to phase in the increase. Those providing health insurance will have four years to complete the move. Smaller organizations will be given seven years, with the new wage including a consideration for tips and health care costs over the first five years. Once the $15 wage is reached, future annual increases will be tied to the consumer price index. Murray said 21 of 24 members of his minimum wage task force, which included representatives of business, labor and community groups, voted in favor of the plan. “I think that this is a historic moment for the city of Seattle,” Murray said. “We’re going to decrease the poverty rate.”

San Francisco’s minimum wage is currently the highest at $10.55/hour. Murray’s plan must now be approved by the Seattle City Council.