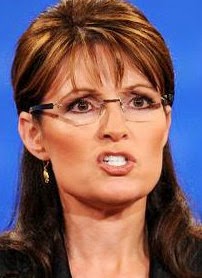 “Just knowing that her daughter Chelsea is pregnant, with a baby–It’s a real baby!–It’s not some disposable something, and I know that’s going to be controversial,” Palin said in an interview set to air Wednesday on “Extra.” A grandmother herself, Palin said parents and grandparents “realize that sanctity of life, how innocent, how precious it is.” “And of all places, it should be in the womb that these babies are protected,” the former Alaska governor said. “So maybe even on a social issue like that, she’ll open her eyes. I think anyone who is a grandparent really starts looking even further down the road,” she continued. “We start thinking about things like $17 trillion debt that our nation is under, we’re going to hand that to our grandkids for them to pay off? For our short-sighted thinking and spending today? That’s not right. That’s not fair to our grandkids. Hopefully she’ll start thinking along those terms too.”

Palin continues to be under fire from Christian groups for last week’s comparison of waterboarding terrorists to baptism.

Previous Courtney Love – You Know My Name
Next Chris Meloni: Guys Hit On Me In Showers