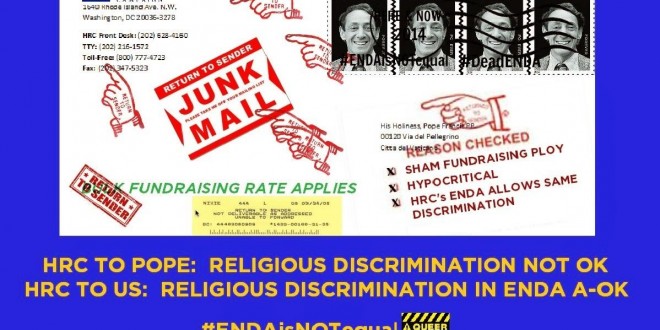 At the same time it is criticizing Roman Catholic schools for their anti-LGBT discrimination, the Human Rights Campaign (HRC) is lobbying in Congress for the Employment Non-Discrimination Act (ENDA) that has a religious exemption that would allow that discrimination under federal law. “All discrimination is immoral and HRC is right to object to what these schools are doing,” said Ken Kidd, a member of Queer Nation. “So why is HRC spending millions in Congress to promote ENDA when that legislation has a religious exemption that will let Roman Catholic schools and other religiously-affiliated institutions fire LGBT people and perhaps even pro-LGBT people?” “HRC can’t have it both ways,” Kidd said. “It can’t criticize Roman Catholic schools for discriminating against LGBT Americans and then seek to make that discrimination legal under federal law. ENDA is a lousy bill and it should be scrapped. What the LGBT community needs is comprehensive federal civil rights legislation.”

The current form of ENDA is also opposed by the Los Angeles Gay & Lesbian Center, Lambda Legal, the ACLU, the National Center for Lesbian Rights, the Transgender Law Center, and Freedom To Marry. ENDA was approved by the Senate last last year but remains stalled in the House.

Previous Insurers Accused Of HIV Bias
Next The Rainbow Flag: A Photo History