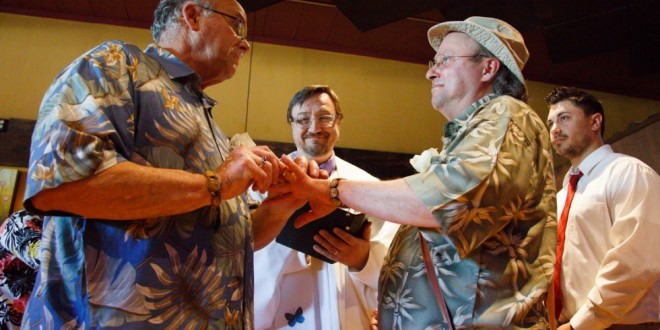 Dozens of gay and lesbian couples are now legally married in Oregon after a judge invalidated the state’s voter-approved ban on same-sex marriage. Jubilant couples began applying for marriage licenses immediately after U.S. District Judge Michael McShane issued his ruling Monday, and many were married hours later. In Portland, Multnomah County issued more than 70 licenses, according to the gay-rights group Oregon United for Marriage. Gay and lesbian couples can legally marry in 17 states and the District of Columbia. The two most recent states to make the unions legal were New Mexico and Hawaii, both of which did so in late 2013.

The 9th U.S. Circuit Court of Appeals on Monday turned down NOM’s request for an emergency stay to prevent McShane from issuing his ruling. However, the group now has an Aug. 25 deadline to submit a brief arguing why it should still be allowed to intervene in the case. John Eastman, NOM’s chairman, admits that could be an uphill battle but he said: “We’re not without arguments.” Even if the 9th Circuit turns down the intervention request, the overall issue appears headed back to the U.S. Supreme Court. Gwynne Skinner, a Willamette University law professor who has followed the gay marriage litigation, said she expects the court to move toward nationalizing same-sex marriage. “I think the train has left the station,” she said. “I just can’t see a huge step back.” Eastman disagreed, saying he thought Justice Anthony Kennedy, the swing vote on the Supreme Court on this and so many issues, would be reluctant to force gay marriage on the conservative states where it has faced more resistance. He said it’s possible that same-sex marriage licenses issued in Oregon could someday be in “legal limbo.”