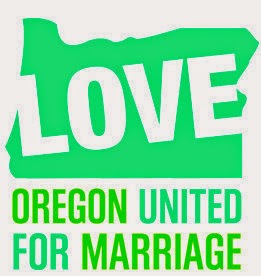 Oregon United for Marriage submitted an amicus brief in the Rummell v Kitzhaber marriage equality case, noting that if the judge ruled in a way that allowed for same-sex couples to marry by May 23, the campaign would not submit the 160,000 signatures gathered to put a marriage equality measure on the ballot. Today is May 23—and following Judge Michael McShane’s ruling that extended the freedom to marry to all loving, committed couples in Oregon, a ballot campaign to address the same issue is no longer needed. “We are confident that the freedom to marry is secure in Oregon and that we do not need to move forward with the ballot measure,” said Oregon United for Marriage deputy campaign manager Amy Ruiz. “It is time to celebrate this victory for Oregon.”

Previous Matt Barber: Ron Reagan Will Spend An Eternity Wracked With Fear And Torment
Next TRAILER: The Vanishing Act