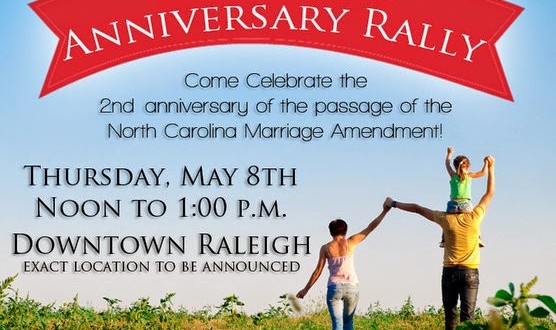 From the Christianist group Return America:

On Thursday, the homosexual community is planning a protest against this momentous anniversary event. They will appear before five different Register of Deeds offices in North Carolina asking for marriage licenses. They are also planning a group meeting demanding that North Carolina accept same-sex “marriages” from other states. In Raleigh, a same-sex couple will appear before the Wake County Register of Deeds Office to ask for a marriage license.

To celebrate the second anniversary of the North Carolina Marriage Amendment, Return America is joining with other like-minded groups on the South Lawn of our State Capitol Building for a celebration of our Marriage Amendment. The celebration will be held from 12:00 Noon until 1:00 PM. We are asking pastors from across North Carolina to join us and bring as many people as possible with you. This is a prime opportunity for us to take a Biblical stand on what we proclaim from behind our pulpits.

Jeremy Hooper points out that Thursday is also the second anniversary of President Obama’s “evolution.”