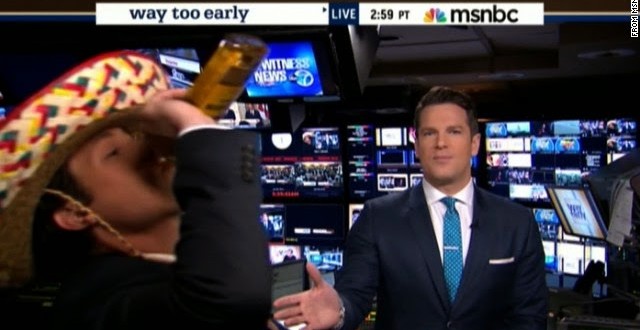 For the last two days right wing sites have been blasting MSNBC for a brief but bizarre Cinco De Mayo segment which featured a sombrero-wearing host swigging from a Corona bottle and rattling a maraca. Today Thomas Roberts issued an apology following a blistering denouncement from the National Association of Hispanic Journalists. An excerpt:

This is simply the worst example I have seen of a discriminatory stereotypical portrayal of any community by any media. The fact that this was done by a news organization is abominable. This wasn’t a chance occurrence. This was a planned segment where many decision makers at MSNBC’s Way Too Early program agreed on the content and execution which concluded on what was seen nationwide. It feeds to the ignorant misconceptions of a rich and proud people who unfortunately are too often portrayed as caricatures to be scoffed at. The National Association of Hispanic Journalists (NAHJ) denounces the actions taken by the MSNBC journalists for their capricious actions, lack of judgment, insensitivity and attack of the Mexican community. The segment clearly proves that diversity is lacking at the Way Too Early program. Too often mistakes like these are made because the people making them are not representative of the community the content portrays.

Monday’s segment is in the second clip below.