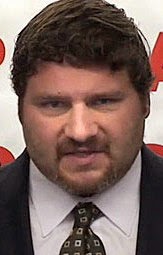 Matt Barber: Ron Reagan Will Spend An Eternity Wracked With Fear And Torment

“Sometimes you have to wonder if the apple even came from the same tree. In a snarky ad for the FFRF, an anti-Christian extremist group, Ron Reagan, younger son of the late, great President Ronald Reagan, proudly declares that he is an ‘unabashed atheist’ who is “alarmed by the intrusions of religion into our secular government.’ Mr. Reagan smugly signs off with, ‘Ron Reagan: Lifelong atheist, not afraid of burning in Hell.’ Repent, believe upon and ask forgiveness of the Lord of the universe, Jesus Christ, and you will have nothing to fear. Refuse to do so and your foolishness and arrogant God-denial in this life will be replaced with an eternal fear and torment that your finite brain cannot even begin to fathom.” – Hate group leader Matt Barber, responding to this.

Previous Tony Perkins: Gay Marriage Will Lead To The Dissolution Of The Republic
Next OREGON: Ballot Measure Dropped