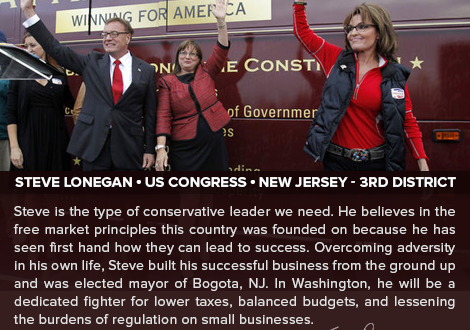 Sarah Palin campaigned on behalf of Steve Lonegan when he ran against Cory Booker for the US Senate with the endorsement of NOM. That, obviously, didn’t turn out so great. This time Lonegan is running for the US House seat to be vacated by GOP Rep. Jon Runyan, who last year announced he was leaving Congress over his anger with Republicans for the government shutdown, which Lonegan himself blames for his loss against Booker.

Furthering the typically teabagger bizarreness, last week Lonegan’s GOP primary opponent in the House race, Tom McArthur, sued him for defamation for claiming that McArthur had been accused of insurance fraud.  The likely Democratic nominee in the race is Aimee Belgard, who has only served one year as a county administrator.  McArthur has been endorsed by the local GOP. The primary is one week from today.